Charles White was born April 2, 1918 to parents Ethelene Gary and Charles White. Ethelene originated from Mississippi. She worked as a domestic from the age of eight, but she loved music and dreamed of becoming a music teacher. Due to poor finances that dream never came to fruition. In 1914 at the age of sixteen, after her mother’s death, she moved to Chicago. Charles White Sr. was a waiter on a railroad dining car and a construction worker. They met in Chicago in 1917. In the following years Charles was born. As a domestic worker, Ethelene rarely was able to take Charles to work with her, nor could she afford someone to watch over him. As a result, sometimes, she would leave him in the library while she went to work. It was in those days spent in the library that Charles developed not only a love for reading but also his initial skills as an artist. As early as five years old he would recreate the shapes and forms in the magazines and books he would find.

Though they were very poor, Ethelene bought Charles a set of oil paints for his seventh birthday. His first attempts at creating art were very poor due to his lack of understanding how to properly mix the linseed oil with various pigments or use the turpentine. Though disappointed the bright boy was not discouraged. Upon encountering a group of Art Institute of Chicago students in the park, he decided to learn from them. Everyday for a week he would go to the park with his paint set. There he would ask questions and watch their movements. This way he learned to use linseed oil and turpentine, as well as how to apply paint to a canvas. So excited to test out his newly learned skills he decided to use one of his mothers’ curtains as a canvas. When Ethelene came home to find the mess Charles, she was not pleased. After disciplining him, she took his paints away. It was at this time she decided he should play the violin. With her extra earnings she bought him one and paid for lessons. While Charles continued to play for the next ten years he never pursued it with the passion he did his art.

After the passing of his father in 1926, Ethelene married a steel mill worker named Clifton Marsh. Shortly after their marriage, Marsh slipped into alcoholism. This resulted in many violent arguments and the mistreating of Charles. Charles would often escape into his art, leaving his house to wander art galleries. Nineteen twenty-six was also the year Ethelene started sending Charles to Mississippi twice a year. There amongst his relatives he learned of his Southern heritage and folklore. It was this knowledge, along with the bonds he formed with his aunts Harriet and Hasty Baines, which would heavily influence and shape his artwork.

Since it was the Depression Era Charles went to work at the age of nine. He did everything from deliver groceries to working as a porter to shining shoes to contribute financially to the household. In between his odd jobs and school, Charles practiced his craft as much as he could.

In the seventh grade, he won a scholarship to attend Saturday classes at the Art Institute of Chicago. There he was able to Study the Masters as well as emerging artists. Charles’ mother had instilled in him the importance of reading and Charles enjoyed it as much as could. In his teenage years, there was a shift in his consciousness after he read Alain Locke’s The New Negro. By reading this text, Charles White learned of important and influential African American figures such as W.E.B. Du Bois, Roland Hayes, Harriet Tubman, and Booker T. Washington. It became glaringly obvious to White that these figures were missing in the lectures he was receiving at school. Energized by his new findings and sense of pride Charles brought that excitement to his classes and began to question teachers as to why these prominent black figures, who had helped shape America, were missing in their recounts of American History. Unfortunately, his teachers interpreted his questions, when they did not flat out ignore them, as a disruption. Consequently, he was labeled a problem student. This angered Charles and built resentment. He became disillusioned with school.

Even though he faced a struggle with academics, his artistic talent continued to grow. Many of his art teachers, sensitive to his academic problems, encouraged him through his artwork. As a result, Charles entered many contests and submitted numerous drawings. In his sophomore year he won a scholarship to the Chicago Academy of Fine Arts.

Upon his arrival, however he was told that an error had been made and in fact he had not won. Undeterred, Charles won another scholarship, this one to the Frederic Mizen Academy of Art. Again, when he arrived the dean told him that there was a mistake and the scholarship had been given to a white student. These occurrences had a disturbing effect on Charles. Though he showed, repeatedly, he had talent enough to make something of himself as an artist he was barred from achieving that dream because he was African American. Charles began a streak of truancy from school.

On days when he was being truant, he would find himself in the library or in the art galleries of Chicago. At age fourteen White became the youngest member of the Arts and Crafts Guild. He had learned about the Guild through an article in the Chicago Defender. This group consisted of black artists such as Margaret Burroughs, Charles Davis, and Bernard Goss. The members were not formerly trained and could not afford to attend formal art classes. All except for George E. Neal, who was a student at the Art Institute. He was elected the Guild president. Neal would teach the other members whatever he had learned in class that week. In an attempt to further educate themselves, members of the Guild would throw parties and charge a cover fee. With the earnings, they would nominate a member a week to attend art classes and bring back what they had learned to the group. This practice went on for several years. Although Charles was never nominated to attend the weekly classes he, as well as the other members, were encouraged by Neal to take the techniques they had learned and draw or paint what they saw in their neighborhoods, as opposed to recreating something from a book or magazine.

Through exhibitions, the Guild put on throughout the 1930’s Charles White and other artists were able to display their work to a larger audience. This was an achievement for the budding artists. The early pieces in these exhibits showed White’s grasp and understanding of Western techniques. What they lacked was the thread of black history, black subjects and struggles or social changes that run through and mark his later works. Unfortunately, these earlier pieces of Charles White are thought to have been destroyed in a fire.

The emergence of a social consciousness and decisive voice in White’s work was a result of his association with the Arts and Crafts Guild. Through them he was brought into a larger circle, a realm of progressive artists that included African American writers, playwrights, and entertainment figures. His eyes were open, exposed to people devoted to changing the accepted forms of justice and reshaping the image of the Negro in American from a dark, hulking, unconstructive figure to one with a more positive, constructive and uplifting view.

In May of 1937, after the two thwarted attempts to enter art school, Charles White won a one-year full scholarship to attend the Art Institute of Chicago. Due to his high energy and diligence, Charles White was able to complete the two-year program in just one year. 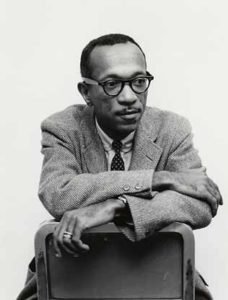 As part of President Franklin D. Roosevelt’s New Deal programs launched in 1933, aimed to help the economy and support American citizens affected by the Depression, the Works Progress Administration (WPA) was responsible for gathering artists from across the country to complete commissioned public works. When Charles White joined the WPA it was his first official job as an artist after completing school. He worked side by side with both black and white artists. However, when several black artists were treated unfairly, White joined his fellow artists to form a union. They picketed the project and though they were jailed, White learned the very important role of a union and what it meant to actively fight for people’s rights.